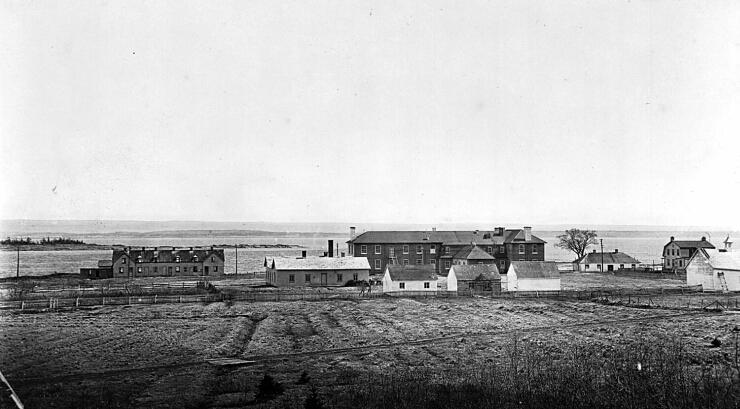 Located in the middle of the St. Lawrence River, Grosse Île  dominates the Isle aux Grues archipelago. In its function as the quarantine station for the port of Québec, the island was the main gateway for immigrants to Canada until World War I. Grosse Île stands witness not only to human tragedies but also to the exceptional dedication of the personnel who worked on the island. More than 7000 people were buried on Grosse Île, the majority of whom were victims of the typhus epidemic of 1847. 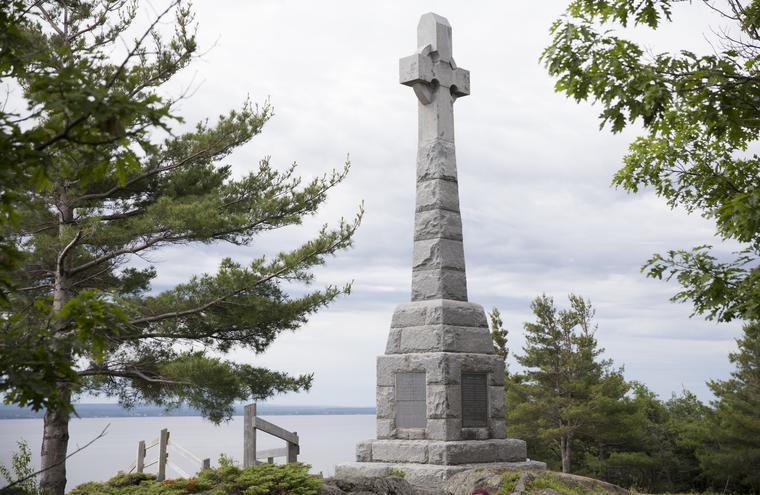 Human occupation of Grosse Île began many years before the quarantine station was opened in 1832. The first written traces of the occupation of the island date to the 17th century: on September 4, 1662, Governor Pierre du Bois d'Avaugour granted Noël Jérémie de la Montagne land on the island for farming purposes.

Subsequently, the island changed owners several times. On July 30, 1831, it was leased a final time to Pierre Duplain by Louis Bernier. At that time, a house and large shed, a stable and various outbuildings occupied the eastern sector. Both the owner and tenant were expropriated the following year so as to make room for the quarantine station.

Once Napoleon imposed the Continental Blockade on the British Isles beginning in November 1806, Québec became a pivotal port in the export of timber to England as well as the headquarters of the British military forces stationed in North America.

A cholera pandemic originating in India began to spread as of 1826. Then, beginning in 1831, it struck the British Isles, leaving numerous victims. Fearing that the disease would cross the Atlantic, the authorities looked for ways of protecting the colonies. Ultimately, following the enactment of a bill by Lower Canada's Assembly, a quarantine station was opened on Grosse Île under the auspices of the British army in 1832.

Québec numbered some 27,000 inhabitants in 1831. A quarantine station would enable the city to protect itself from the arrival of diseases by temporarily isolating inbound passengers and by keeping immigrants who were sick or suspected of being sick at some remove from the local population. Accordingly, Grosse Île's western sector was opened in order to receive these immigrants.

Unfortunately, however, these efforts ended in failure. In 1832 alone, close to 4000 people died of cholera in Québec. At more than 50,000 new arrivals, compared to an average of 20,000 in the preceding years, 1832 proved to be a year of massive immigration.

From the turn of the 19th century until 1845, Ireland experienced an unprecedented demographic boom, its population doubling from four million to eight million during this period. Such phenomenal growth affected the agrarian structure: as land holdings became increasingly smaller, a sizeable portion of the population had to maximize its potato production in order to secure their sustenance. The lowering of farm tariffs in 1815 intensified the financial precariousness of Irish households. In addition, from the late 1830s, Ireland was hit with a series of poor crops that further fuelled its food supply problems.

Beginning in 1845, Europe - and Ireland in particular - was ravaged by late blight (also known as potato blight), a mould that infected potatoes and tomatoes alike. During the next several years, the blight devastated Ireland's potato crop, which in turn created a terrible famine, considering that the diet of a sizeable proportion of the population was based on this staple.

These events triggered a huge wave of emigration to North America and spawned an Irish diaspora. Close to 100,000 immigrants, 95% of whom hailed from Ireland, arrived at the port of Québec seeking to escape the Great Famine and to secure a better future for themselves.

In an attempt to meet the urgent need to offer lodging to the swelling numbers of immigrants, the quarantine station authorities sped up the construction of shelters and the installation of hundreds of tents on Grosse Île. The western sector, opened in 1832, was quickly overrun by people. To compensate for the lack of space, the station authorities thus decided to use the eastern sector to accommodate the steady stream of new arrivals.

In spite of the efforts and exceptional dedication of the staff, the station was witness to the greatest tragedy in its short history. No fewer than 5,424 people were buried on Grosse Île in 1847, with typhus and diphtheria being the primary causes of this unusually high mortality rate. That year, many island employees also fell victim to disease in their efforts to aid the new arrivals.

What is more, of the 100,000 immigrants who left Europe for Canada that year, 20% died before reaching their final destination - i.e., at sea, on Grosse Île, or at points further west. Many children lost their parents in that fateful year; most of that number were adopted by Québécois families in the area. These orphans nevertheless kept their Irish family name.

All in all, during the quarantine station's 105-year-long existence, 7,553 immigrants were buried in one of the three cemeteries located on Grosse Île. Thus the deaths recorded for 1847 represent 72% of Grosse Île's total mortality.

Beginning in 1848, the eastern sector was turned into the hospital sector while the western sector was reserved for people under observation. As a result of this division, sick people could be kept separated from health people and the risk of contagion could be reduced. In addition, by confining sick people to the eastern sector, the idea was to allow the prevailing westerly winds to blow "miasmas " out over the river and not over healthy people. According to the beliefs of the time, miasmas - putrid, invisible, free-floating particles - attacked bad Christians and people of loose morals. At the time when the quarantine station first went into operation, few doctors practiced what today would be considered a scientific type of medicine - i.e., based on "contagionist" principles; the majority tended instead to hold to a dogmatic type of medicine. Modern medicine really came into its own in the 1870s, thanks to the discoveries of Louis Pasteur andRobert Koch and to improvements in the microscope.

In 1869, Dr. Frédérick Montizambert took over as the station's third superintendent. During the subsequent 30 years, he would travel around the world, tour various quarantine stations, and implement the best techniques in Canada. Montizambert modified the quarantine process and made the Grosse Île station a leading-edge facility for its time.

The 1880s were particularly decisive for the future of the station. Work was begun constructing a brick hospital in 1881. As of 1886, incoming ships were systematically disinfected and fumigated . Year 1893 saw the completion of the disinfection building, designed to handle both immigrants and their baggage. Finally, in response to the growing requirements of maritime transport companies, a hotel for cabin passengers was built in 1893.

With the arrival in 1899 of Georges-Élie Martineau, Montizambert's successor and the last quarantine station superintendent, modernization of the island continued, particularly through the advent of electricity in 1902. Under Martineau's supervision, the station was equipped with a vaccination and medical inspection office along with a bacteriological laboratory, a first-class hotel and a third-class hotel.